Is "The Black Witch" racist?

Every now and then, Book Twitter – the informal community of authors, editors, and librarians, mostly in the young adult genre, who communicate with each other on the social media platform with the bird – goes into red alert when they discover an upcoming release that they think is offensive.

That they think is harmful to marginalized* people (i.e., women, blacks, Latinos, indigenous people, LGBTQ+, the disabled, and Muslims. Not often Jews, though).

That they think will literally lead to the deaths of marginalized people.

One of Book Twitter’s most recent targets is The Black Witch, an upcoming young adult fantasy by author Laurie Forest. It is scheduled to be released on May 2, 2017. Shauna, a popular book blogger, read an ARC (Advanced Reading Copy), and wrote a long review. A review of about 8700 words, long enough to be a novelette.

What is her conclusion? “The Black Witch is the most dangerous, offensive, [sic] book I've ever read. It's racist, ableist, homophobic, and is written with no marginalized people in mind.”


I will not do a deep dive into the plot of The Black Witch because Shauna has already done so. Go and read her review. I think it is very well done. Having read the whole book, she has earned her right to an informed opinion. It is an opinion I disagree with.


Is the world where the protagonist comes from problematic (i.e., racist, sexist, and homophobic)? Objectively, yes.


Does that make the book itself problematic? Not necessarily.


The protagonist of The Black Witch grows up in a culture where racism, sexism, and homophobia has been baked in. Where atrocities, up to and including genocide, are a part of the history. When you grow up in that kind of culture, you will probably not question it because you have not been taught to question it. It takes exposure to other ideas – over time – and some sitting in thought (which some people never get around to) before you even start the process of unlearning. The Black Witch is just the first book of a series; there is plenty of book-time for the protagonist to see what is wrong with her world.


There is a truth, a Reading 101-level truth, that Book Twitter seems to have forgotten altogether: Depiction is not endorsement. Writers can describe worlds and characters with problematic mindsets. That does not mean that the writer agrees with that mindset, nor that the writer intends that readers should agree with the mindset. The culture of The Black Witch – at least, in this first book – is clearly dystopic and not a place I want to live in. (I am personally not fond of dystopias, YA fantasy, and books that combine the two. So I will not be reading the book myself.)


These days, the “woke” crowd wants all problematic talk and beliefs to be challenged right away, in the story, and with full force. That is Very Special Episode-level moralizing, and it is neither realistic nor is it good storytelling.


I am in the process of writing a stage play. In the opening scene, two of the minor characters use the word “retard” in a casual way. I don’t approve of the word “retard,” but in the scene no one else rebukes them or even makes a comment. It is up to the audience to decide how to feel about what they say. That is part of my storytelling policy.


Book Twitter did its part for social justice by leaving 1-star reviews for The Black Witch on Goodreads (without reading the whole book themselves, which is a reviewing faux pas). Here were the instructions:

Now, do I believe that it’s possible that a book can be traumatizing for a reader? Yes. Do I believe that authors therefore have a responsibility to minimize or even eliminate such trauma? No.


I believe it’s just like having a food allergy. Labels are of course helpful, but in the absence of labels it is your responsibility to ask questions and do your research before consuming.


What of the argument that problematic books can cause people’s deaths, whether through suicide or murder? Well, in the bad old days, media representation of marginalized groups was either nonexistent or offensive to the nth power. (If you don’t believe me, look up a cartoon from 1941 called “Scrub Me Mama with a Boogie Beat.” Among many, many other things. If you dare.) And yet, the majority of marginalized people survived.


Also look at this Venn diagram: 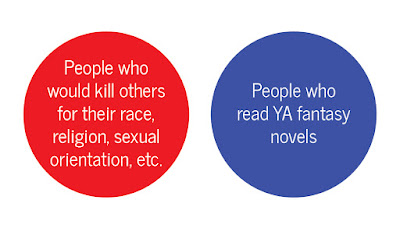 When the rhetoric turns from “This offends us” to “This harms us” to “This is literally killing us” – with no change to the content of “this” – how much further can Book Twitter possibly go to get their message across? And will most people even care anymore at that point?

I have no plans to find out. I have torn out the last damn** from my book of damn coupons to give to Book Twitter drama, and now it is twirling far, far away from me. It’s a wonderful sight.


* I personally don’t like the term “marginalized” because I feel it is disempowering and a bit condescending, but I use it here so you will know who I am talking about (especially if you follow Book Twitter).


** I wanted to use another four-letter word here, but I’m not quite ready to yet on this blog.